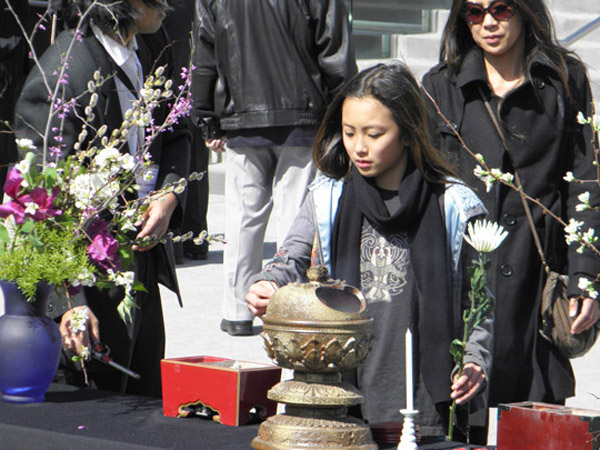 Lessons learned from the earthquake and tsunami that struck northeastern Japan a year ago were shared at a “Love to Nippon” memorial event Sunday at the LAPD’s Ronald F. Deaton Civic Auditorium with more than 200 people in attendance.

Co-presented by the Japan America Society of Southern California and the Love to Nippon Project, the program was preceded by incense offerings at a shrine set up outside the auditorium as well as floral offerings in front of a memorial dedicated to fallen LAPD officers.

The emcee was David Ono of ABC7 Eyewitness News, who recently visited the devastated cities of Ofunato and Rikuzentakata in Iwate Prefecture and Kessenuma in Miyagi Prefecture to do a series of reports. He was introduced by Ted Tanaka, president of the Asian America Symphony Association.

The musicians represented the Asia America Symphony Association, which has provided musical instruments to middle and high school students whose schools were damaged or destroyed.

While asking for a moment of silence to remember the nearly 16,000 confirmed dead and the 3,000 still missing, Ono also said that the disaster “brought to the forefront incredible stories of resilience and of generosity” and that the Japanese people “over the past year have reminded the world that the human spirit is as formidable as forces of nature.”

Bishop Noriaki Ito of Higashi Honganji conducted chanting and bell-ringing to honor those who have lost their lives. “Our Buddhist tradition encourages us to regard all who have passed before us as our Buddhas, our teachers, to remind us of the impermanence of life,” he said. “They remind us … how important it is to live each day, each moment to the fullest of our abilities.”

Ito asked the audience to remember the survivors. “We must continue to support their efforts to regain their homes and their livelihoods. May we be inspired to keep them in our hearts … and to extend our compassion to all who are facing challenges in Japan and throughout the world.” 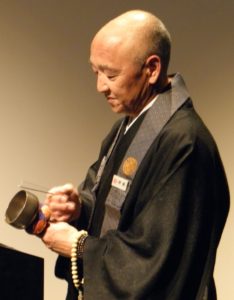 Deputy Chief Terry Hara spoke on behalf of the LAPD, which provided the venue. “This is an event that we believe very strongly in supporting, knowing that the thousands and thousands of people that lost their lives, include the public safety personnel … We wanted to do something so that we could also remember them,” said Hara, a Sansei who has friends who lost loved ones in the disaster.

He added that it’s important to “remember that tragedy can occur but that we must take precautions, be prepared for any catastrophic event.”

Consul General Jun Niimi expressed Japan’s gratitude to local groups and individuals who lent a helping hand. “Here in Southern California, grassroots efforts were initiated by many of you here … (JCCSC) started a relief fund the day of the earthquake …The Los Angeles County Urban Search and Rescue team was deployed within 24 hours of the disaster … The Asia America Symphony Orchestra organized a Japan relief benefit concert … Thank you so much for channeling your skills and talents in leadership, music, emergency aid, journalism and more to assist Japan in its great time of need.”

The solidarity and support from the U.S. “have been deeply ingrained in our hearts,” Niimi said. “… The message to Japanese is that we have friends, we have kizuna (bonds) across the Pacific and across the entire United States. We will never forget.” 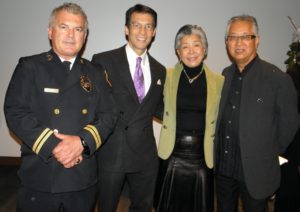 Nancy Woo Hiromoto, chair of JASSC, recalled the evening of March 10, 2011 (PST), when “the society reacted effectively and immediately within minutes after Japan’s worst national disaster. In addition to providing information to those in the United States looking for loved ones in Japan, we also promptly established the 2011 Japan Relief Fund. Then we began our work to reach out to the broader community to bring awareness and to gather support.

“Exactly one year later, the results of our efforts is the astounding $1.4 million raised, and that is just locally. Japan America Societies have collectively raised over $23 million … As we go forward, the society will continue its dedication into the next phase. We will assess the rebuilding in the damaged areas as well as other long-term recovery projects in an attempt to try to establish life in Japan back to some sort of normalcy. But more is needed and much remains to be done.”

Ono, who traveled with the L.A. County Fire Department Urban Search and Rescue team after Hurricane Katrina and the earthquake in Haiti, introduced Battalion Chief Larry Collins, whose team had just returned from recovery work in Christchurch, New Zealand when they were sent to Japan.

Collins explained that his team is one of two that responds to international emergencies under the auspices of the U.S. Agency for International Development (the other, from Fairfax County in Virginia, was also sent to Japan) and is one of 28 federal teams that respond to domestic emergencies. In addition to natural disasters, he has witnessed the aftermath of 9/11 and the Oklahoma City bombing. A year ago, the team was dispatched to Ofunato and Kamaishi.

“What we experienced in Japan was not just a series of tragedies and lessons about disasters, but also about how people cope with disasters,” he said. “The grace of the Japanese people was evident to us from start to finish during this mission.”

Although there has been criticism that authorities were unprepared for the disaster, Collins observed, “The Japanese government is so well organized and has such a great tsunami alert system and warning system … I’m sure countless lives were saved by the actions of disaster planners … The tsunami warning sirens were going off. While we had huge life loss in this event, it could have been far worse.”

One lesson learned was that “no one was immune from this disaster if you were in the path of a tsunami and didn’t make it to higher ground … Again, the fire and police responders were not immune from this at all,” he said.

The 74-person team, including firefighters, medical doctors, civilian structural engineers, and search canines, stores 60 tons of equipment in Pacoima and is ready to go at a moment’s notice. They left LAX in military and civilian aircraft, landed at Misawa Air Force Base, and convoyed to the impact area. The L.A. team met up with the Fairfax County team and a team from the U.K., “so the three teams responded together … as basically one large unit,” Collins said.

Showing slides from the search and rescue operation, he recalled, “Our job was to work for the Japanese government and report to the local officials … We had translators from the Foreign Ministry of Japan and we were working with fire chiefs and fire officers from Tokyo, Osaka, and other major fire departments … They assigned us the areas that we were going to search, within those areas we set up grid systems … concentrating on the areas where we might find survivors.”

The priority was to find survivors in the rubble, but only bodies were found. Noting that many people evacuated to “safety zones” that were engulfed by the tsunami, Collins said that another lesson learned is to plan for “worst-case scenarios.”

He is often asked whether his job is depressing, and his answer is: “Every time we see tragedy … at the same time we see the best of humanity. We see strangers helping strangers, we see people helping each other who don’t know each other and may never see each other again … It’s life-affirming.”

Masako Unoura-Tanaka, a Los Angeles resident who barely survived the tsunami while visiting relatives in Tohoku, presented Collins with a thank-you letter from Yuichi Sasaki, the fire chief of Ofunato, who was unable to attend. 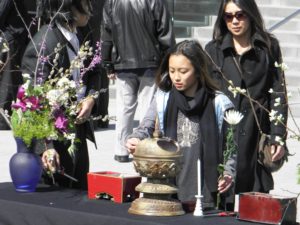 Outside the LAPD auditorium, attendees lit incense and prayed for the tsunami victims. (Photo by J.K. Yamamoto/Rafu Shimpo)

Before screening his mini-documentary, Ono said that he went to Japan right after the disaster but had to report from Tokyo because of the difficulty of getting to the tsunami zone. “This year I was able to go … Masako and Ted (Tanaka) were basically my tour guides. They took me to Ofunato and Kessenuma and Rikuzentakata and showed me these communities that were so hard hit … This tsunami just wreaked devastation up and down the coast of Japan, and these are just small examples.”

The documentary includes Unoura-Tanaka retracing the path that she and her aunt took as they ran away from the tsunami. A stranger led them to safety on the top floor of a building. Even at that height, they were almost submerged; people on the lower floors did not survive. She was able to call her husband in Los Angeles, but then they lost contact and for almost two days he did not know if she was dead or alive.

As a member of JASSC’s Board of Governors, Unoura-Tanaka has led efforts to help the survivors.

Ono also interviewed people putting their lives back together after losing loved ones, homes and businesses. On the lighter side, he met a man who set up a restaurant in an empty shipping container and served “the best noodles I had in my life.”

In one segment that Ono was not able to include in the screening, Unoura-Tanaka’s father — who survived tsunamis in 1933 and 1960 as well as 2011 — was interviewed.

Ono also visited Japan’s earthquake center in Tokyo, where he learned that the instruments were not designed to measure a 9.0 earthquake, so its readings from 3/11 were wrong.

Jeff Macintyre, who co-produced the documentary, described what he saw in Tohoku as “unimaginable … shocking, jaw-dropping. I knew at that moment we were never going to be able to capture in the camera what was in our hearts. It was so crushing. So we did our best to bring that to you.”

Ono recalled that the piles of debris were close to 30 feet high and went on for several blocks. He saw crews going through the material and dividing it up for recycling. But so far only about 6 percent of the debris has been cleared out, “so that’s a monumental task ahead of them,” he said.

Macintyre added, “You walk up close (to the piles) and see pieces of people’s lives, businesses. A hospital was nearby. We saw hospital beds, hospital equipment … snapshots of that moment right before the earthquake.”

A panel discussion followed, moderated by Ono. In addition to the Tanakas, the speakers were Douglas Erber, JASSC president; Richard Fukuhara of Fukuhara Inc. Photography; Shige Higashi, publisher of The Cultural News; Sachiko Kasai of the San Diego Japanese Emergency Network; Dr. Akira Kugaya, psychiatrist and president of Kokoro Wellness Network; and Reiko Sakata, Ph.D., of Sakata Enterprises Inc. They shared the work they have done on behalf of the people of Tohoku. 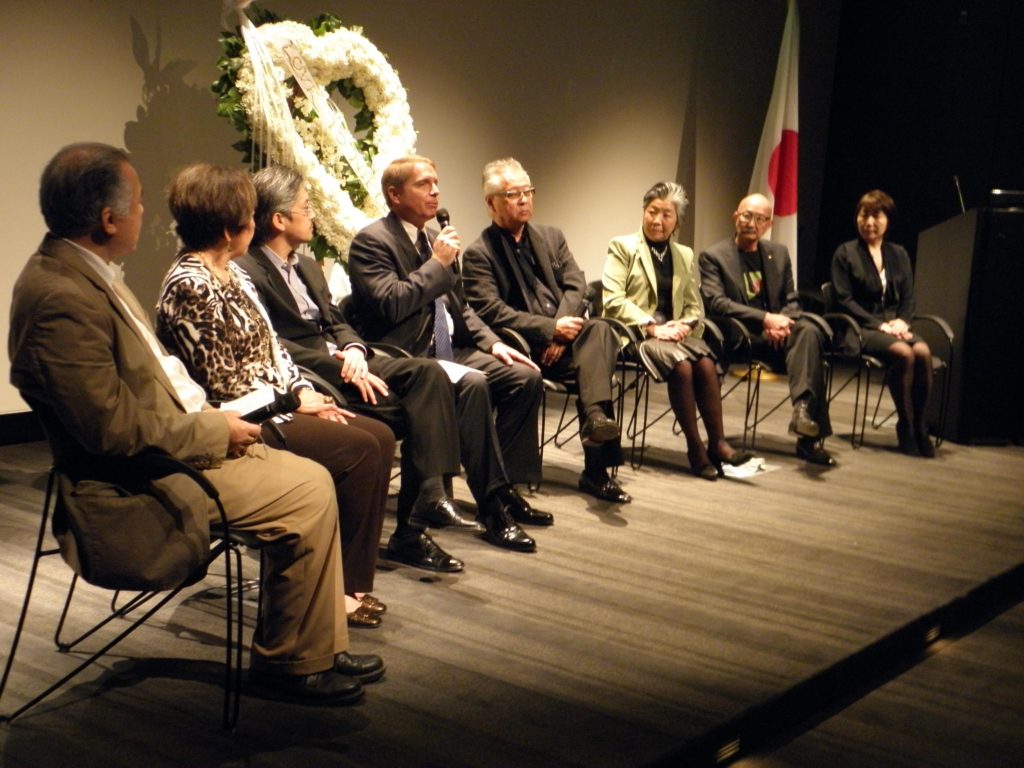 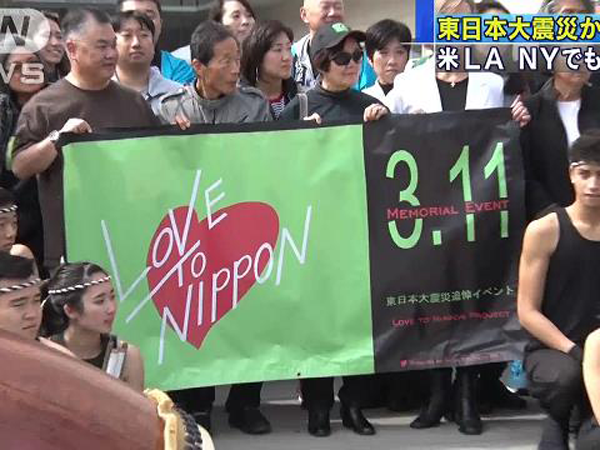 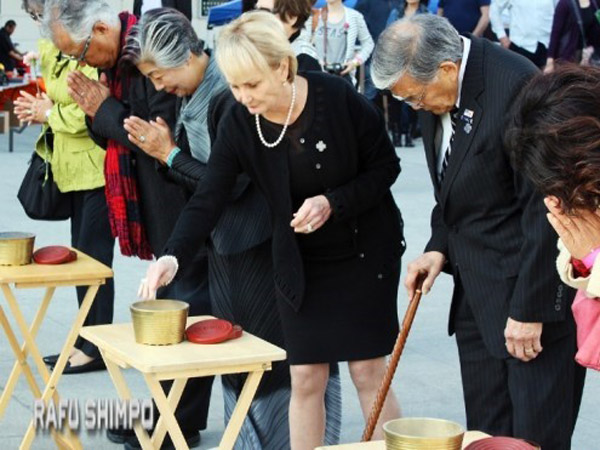 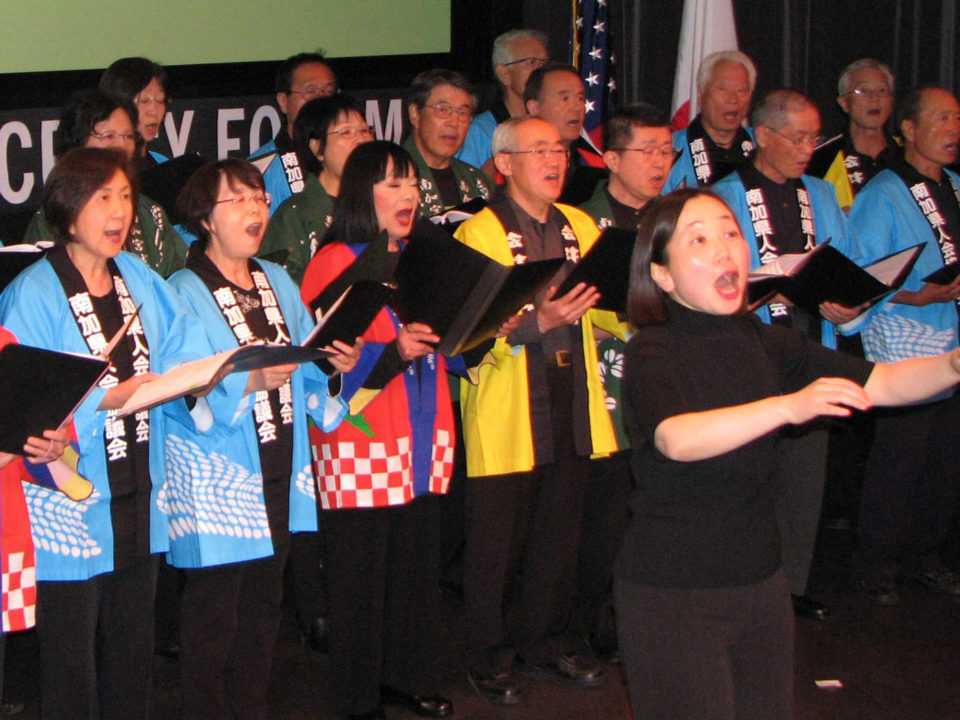